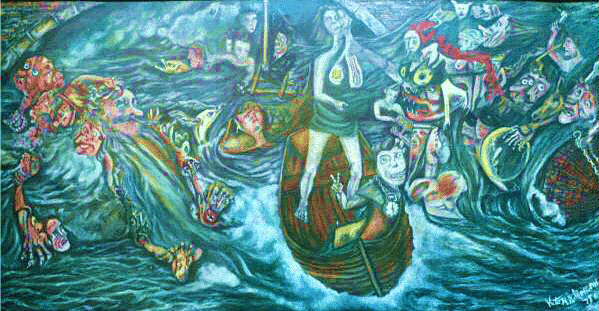 The painting is based on a feeling of working in the giant LLanwern Steel works.

The wrangling and strikes of the various unions over job demarcation.

The double headers and backbiting of men in the rat race to further their own progress to the elevation to the FOREMAN’S job or higher up the slope.

Flying up the road early. A term used to fly off without clocking off get ones mate to clock your card when working on overtime,

General melees of the work place sewer of dog eat dog to put it mildly.

Shop stewards doing the time study for men they so represented.

Could not get on board QUICK enough.

All the graft and corruption of a Nationalised Industry.

The impression of the head of the then chairman Villiar’s awash besides the boat. In this sewer along with the ghost in the mist of monks ditch.

It came to pass that all went down the sewer.

With plan and Perspex view of Isca. Home of the second Augusta Roman Legion.

The Church stands and is shown in the centre of the old Roman City.

You can see plan and view as it is today.

Other views are of local views around the fort.

Not forgetting the Celtic fort on Lodge hill.

The Romans drove the Celts off the hill fort and made it their summer fort.

Again we can observe the over shadowing of Celtic historical past by Roman domination.

The culture of the Celts even today takes a back seat compared to the Roman.

The dominance of Roman excavated building work of amphitheater etc stands out having stood the test of time.

You are able if you ever visit Caerleon.

To view the wealth of Roman Finds in the illustrated pillared Legion Museum.

This is next to church. Right in painting. 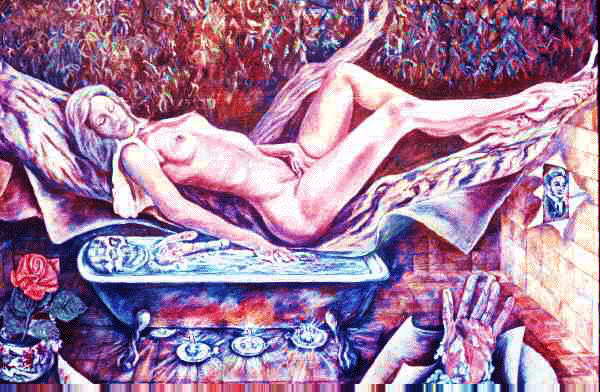 My own vision of the modelling for painting by Millais of Ophelia Drowning in a lake.

And Model for this painting. Elizabeth Eleanor Siddal.

Discovered or seen first by William Allington a Custom Officer.

Who in conversation with Walter Deverall. Disclosed that he had discovered a beautiful girl. Elizabeth Siddal the shop girl who worked in a Milliners in Cranbourn Alley,

Deverall desired a model for his work.

The work his paintings of twelfth night.the subject portrayed in a disguised form.

This introduction soon had Holman Hunt painting this red headed Celt in one of his paintings.

Pre-Raphaelites artists were eager to have her pose for them.

And Millais had her model for his immortal Ophelia.

Elizabeth lying in a bath in Gower Street. Depicted in the bath full of rapid cooling water.

To enact the true pose. With draped wet clothes.

Candles were supposed to have been placed lit underneath to keep the water heat up.

Pre-Raphaelites methods to paint direct or true to nature.

Sadly on meeting one of the other PR.Brotherhood Gabriel Rossetti.

Elizabeth Siddal was pursued and Claimed and later Married to Gabriel Rossetti. His treatment of her and an her early death from an overdose of Laudanum.

A tortured man buried his book of poems in her grave and later dug them up.