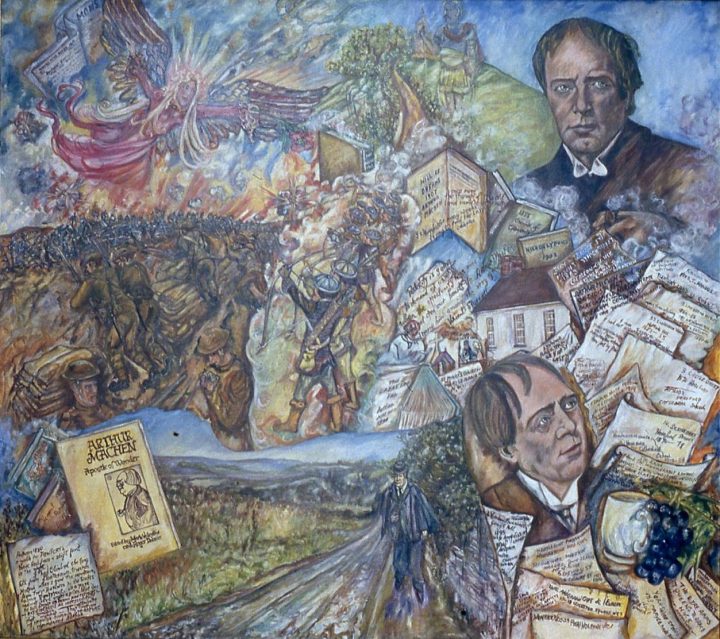 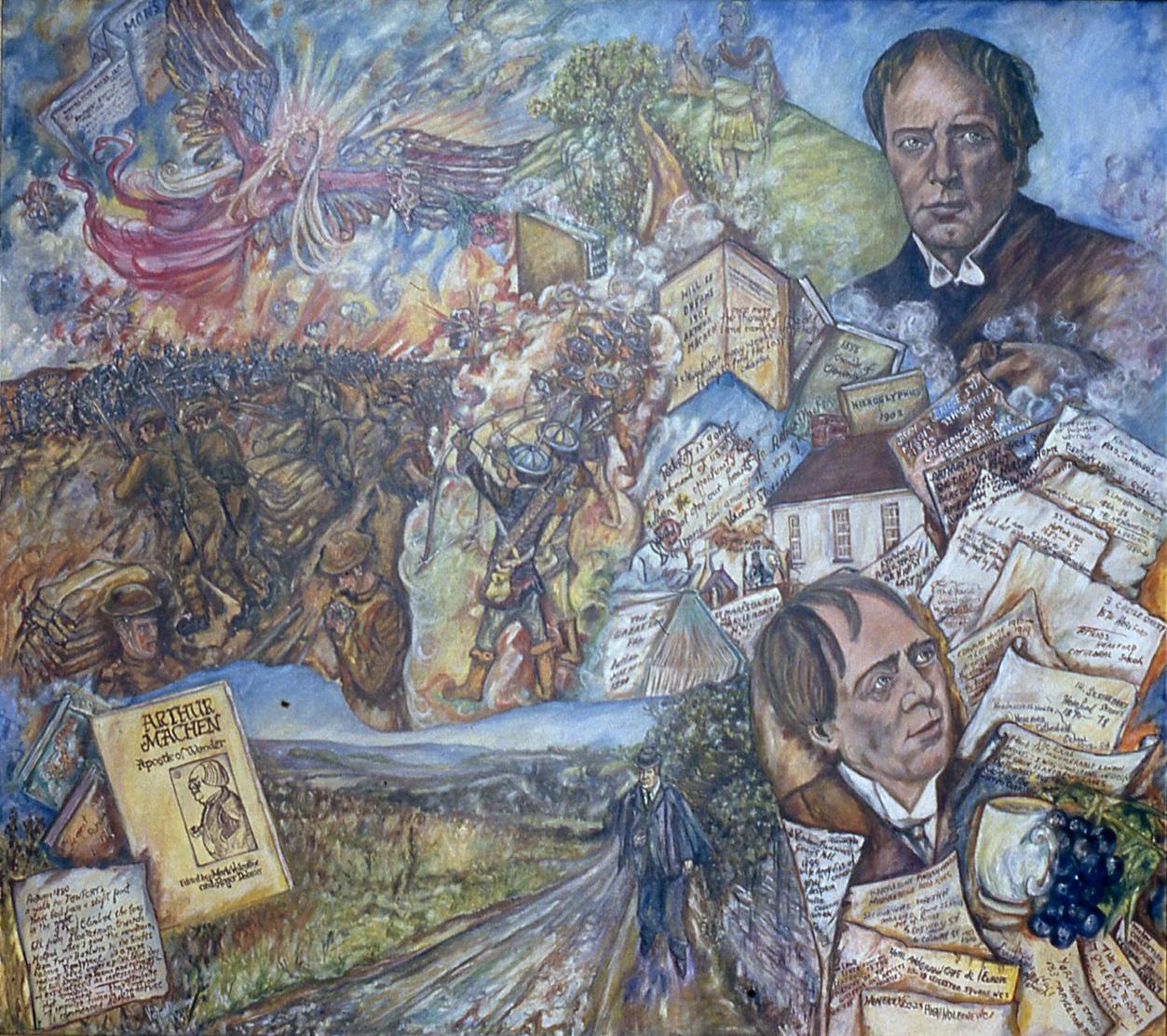 Enlisting in the British army after the fruitless attempts to join the merchant navy at Cardiff turned down not of choice but fancy of going to Gravesend sea school not for me.  I was at the time full of the spirit of adventure in one’s body or plain bloody stupid as my father said when I signed up.

A day out in town on the pop I was with a friend Bernard Danaher who also worked at the same place of employment as I did. The Arrow fuel works adjacent to the transporter bridge in Newport. I at that time of war earned good pay for my age of seventeen years Basics pay £4.15 plus the bonus.

I worked on the small coal which came ladened in big twenty ton iron monsters – At half penny a ton bonus Both Jim and I an older man. We unloaded by shovel but first would open the catches of the side doors of the wagon and coal and dust descended down into an open grill. To be mixed with the tipped up other coal that came in on two other train track roads Moved into position by the capstan by rope around in coil form of energy. Making it easy to  tip this way chain around wheel central underneath axles and hoist up to discharge through the front truck big end door.

Ours hard on the Shovel we both worked to get to the bottom of the smooth floor of steel truck to make an easy slide into small coal.

The day of joining slightly pissed. I had my identity card so easy in for join up Bernard did not have his – lucky him. The office was near the old Argus office in High street Newport near the Doebells pub also near where one day the love of my life worked Lovell’s Cafe and dining rooms.   Fate had decreed that one day when in the RA army service we would meet at the Labour Hall. Passing the medical at Cardiff of a day with the colours swear an oath witnessed then all was set for the March the third ‘45 to join the colours at Lanark to undergo the six weeks training.

Night train to Carstairs the day or evening arrived we were on the cold draughty station of our town on a journey that changed our lives for ever. Fate had made its turn again and mates who followed my crazed action to join up with the armed service for king and country one local friend Billy Richards seen off by his father also other parents waved their sons departure off on a cold dark second of March night on that god forsaken lonely platform Newport railway station, blacked out lights of war time.  I was alone no one saw me off.  We settled in our carriage compartment with overhead dim light bulbs and netting luggage racks and leather straps on windows pictures of seaside towns on each sidewall excitedly we wrote our names on the compartment ceiling. The steam engine puffed its way

Out of that cold drafts swept station that had chilled our young poorly clad bodies. Later on as the year went and leave came and many wind swept blown hair of ye dam loving female of the good bye dolly I must leave you good looking kiss me goodbye tears in eyes and wave as train sped out puff whistle a last sight of a well-dressed costumed girl of  a soldiers dream . And every girl a good attractive bird of the female of the species.  The path to stars heaven and the future being laid in this attraction. Made for the trot or itchy feet as the tears – goodbyes came harder to endure to leave on time at end of leave pass, anyway it was exciting!

But now the heat of the steam heater under the seats wafted to out cold bodies we felt warm and so excited our new adventure   the night was long on the packed train a mixture of service personal  Matloes  on way to bases up in the cold Scottish north most navy bases of that command/ colour of khaki and blue seemed to dominate the packed train girls and boys kipping in corridors on their feet half stewed with the call of that elusive beauty thing called sleep, onward towards  our mystery trip of a life time change for ever “ Castairs Scottish village station”  : Night train to Castairs: Steam engine locomotive, puffing steam and smoke that certain aroma of smoke cinder smuts  a warming mix with carriage under seat cast iron ribbed steam heater,   blending in harmony with clank of carriage wheels against each rail joint of all wheels of each turn this winding towed snake  like monster twelve carriage laden dim lit ghost train of our past destiny.

Those days or nights of wartime journeys were in itself an adventure, to observe the numerable and various uniforms of service men of those war time days uniformed packed station. Directed by RTO offices manned by red caps, police of the army.  Over the bridge to Crew an iron bridge over the railway tracks, for one had to break ones journeys at Crewe.

Go to the welcomed Sally Ann for a cup of tea or one of the many volunteer tea refreshment water holes so thankful were service personnel for any refreshment, as rationing of foodstuff was in full cry Our youth stood out as I expect we young men about to join up looked bewildered and many offers of cigarettes and directions I myself amazed at sailors with of cigarettes stuffed in their breast pockets gifted us looked after us we were young among these so seasoned men of war time Merchmans convoys who had been through hell. Hardships it brings out the best in one fellow men woman who see us young about to endue war time for the first lime.

The memory and the further train journey of a dark cold night maybe the words of mother rang out in mind as bod froze “you won’t like getting out of bed and soldiering on a frosty morning” full of fear rang out in more ways than one when the frost lay on the ground shouting sergeants scream” pick up your kits line up snarl shout spit an swear” Why did I not listen to Dad and mother stay home and worry the girls of  Maesglas. Mother regretted her loss too for I worked and three pounds ten out of her earnings made for harder cash flow. Gordon’s highlands training here we come Day trip to castle martin from Norton barracks Worcester over the wall. Saw Joan then came trotting back with excitement.

REVIEW OF PAST EXHIBITION of paintings by VICTOR MORGAN entitled the First Ten Years’ was at Llantarnam Grange Art Center, Cwmbran from the 12th to the 24th of May 1986. With The Support of Welsh Arts Council

Genuine Primitives are few and far between and searching them out is like prospecting for gold. There is never any shortage of pyrites and dross but the thickest seams are to be found among the generations before 1914. we remember that generation for its plain speech and beautiful handwriting. They spent their lives under-achieving in steelworks and signal boxes and few of them found expression in painting in later life. Victor Morgan how ever is of a later generation and there for a rarer phenomenon-born in 1927. He has no objection to his style being referred to as primitive’ despite the inadequacy of this term and it’s patronizing overtones. He belongs to that category of painters whose total absorption in their subject matter is the secret of their unselfconscious forms and the uninhibited and spontaneous nature of their work. They still have a romantic appeal for us, and we think of them somehow as not having tasted of the forbidden fruit of the artistic tree of knowledge and cultivating their own paradise gardens which we can only view from outside. I first caught sight of his work at the mixed show of local painters at Newport Art gallery-an airship of the 1930s drifting over rooftops in Gwent. This picture typifies a common aim among primitive painters in striving to catch things exactly as they were physically and socially I had the great pleasure of visiting his home and found it wall-to-ceiling with a variety of extremely lively pictures. His oeuvre falls into various categories; the pictures from long-past memory are for me the most successful. A striking example is the washing-day scene of the 1940s.He shows the same involvement in the human figure as in the objects which surround them. The formidable boiler belching steam, a tin bath with wash board and coal bunker-stark and earthy but with a pervading joyous color. I should mention other excellent examples such as the paddle steamer (in the notable collection of M.Athanas Pouley of Paris) tied up in the River Usk and several other powerful images of ships. always surrounded with bright and glittering water which brings back one’s first childhood sensations of the sea. Among his earliest work is a copy of the ‘Hay Wain’ which is anything but a beginner’s cliché’ with its delightful sky, full of fascinating improvisations. He has a strong sculptural sense and has produced a number of pieces in welded metal (he is a welder at LLanwern by trade). I found the smaller pieces the most attractive-crabs and other small creatures, heavy to hold and like all good sculpture, equally interesting which ever they are tilted. Another facet of his varied work reveals his social conscience. These works are crowded with caricatured and reminiscent at times of work of George Grosz: One might be Apprehensive here that Victor might be becoming a little ‘artistic’ here but he takes the new direction with ease and his sense of form remains untainted. I suppose that we must remember that this cherished Naive quality is a relative term and like everyone else he is evolving towards the less naive to some degree. He is only too willing to explain the complicated symbolism in these paintings: medieval in its complexity. It gives us in visual terms the sayings, beliefs, hopes and fears of ordinary people. In case my remarks themselves seem patronising I shall end by suggesting that we are all primitives to some degree and if we succeed in producing anything of value, its essence is after all the primitive aspect of our work.